A petitioner in a case filed against the District Police Commander of Akwatia, Robert Bosompem has expressed disappointment at the Police Intelligence and Professional Service (PIPS), for refusing to release its final report.

It will be recalled that a case was reported to PIPS by Robert Bosompem over the arrest of Ebenezer Ofori Agyei, popularly called Odiasempa, a local reporter with Nkawkaw based radio station, Okwawu Fm by the District Commander.

Sources say that the reporter gathered information about the Police Commander, DSP Yaw Dankwa Agyekum’s unscrupulous conduct from one of his junior officer [name withheld], for allegedly harassing drivers in the Demkyembour District of the Eastern Region.

“He demands ten bags of cement, fowls and unnecessary fines whenever, we are caught for violating the law,” one of the drivers indicated.

Again, the police officer who hinted the news man said, the commander instructed them to account to him GH¢1,500 each day they are on duty. The junior officer further alleged that, the Police Commander has created an unlawful barrier extorting money from the drivers.

Therefore the reporter went to the drivers for details about the allegations but he was only briefed about the victimization they were going through in the district. As result, the journalist made all attempts to get responses from the Commander but he would not budge.

However,  when the Reporter then aired the story on one radio station in the region, the Akwatia Police Commander allegedly ordered his men (policemen) to arrest the reporter.

The reporter’s mobile phones and other gadgets were seized and all audios on his phones and recorder were deleted. He then charged the reporter for defamation and hauled him (reporter) before the Kade Magistrate. 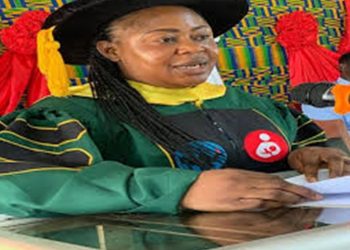