Biden pitches ‘once in a generation investment’ to Congress

by News Desk
in World
Reading Time: 5min read
A A
0

Bill and Melinda Gates divorce after 27 years of marriage

US President Joe Biden has laid out a sweeping investment plan for jobs, education and social care in his first speech to a joint session of Congress.

Delivered on the eve of his 100th day in office, the Democrat pitched some $4 trillion (£2.9tn) in spending – the largest overhaul of US benefits since the 1960s, analysts say.

He called it a “once in a generation investment in America itself”.

But the plans face a battle in Congress before they can become law.

There has been widespread opposition to the proposals from the Republican Party, which is unlikely to back tax increases and more government spending.

And while there is a slim Democratic majority in both houses, there has been division among the party over how far to go with the plans.

What did Biden propose?

The 78-year-old president, buoyed by solid approval ratings, presented the American Jobs Plan and the American Families Plan. The White House said the proposals would be funded by tax raises on corporations and the wealthiest Americans.

“It’s time for corporate America and the wealthiest 1%… to pay their fair share,” Mr Biden said at an event that was scaled back due to the pandemic.

He described the American Jobs Plan as “a blue-collar blueprint to build America” that would boost investment in public transport, high-speed broadband and roads and bridges. He added that the plan would be guided by the fight against climate change.

“When I think climate change I think jobs,” he said. “There’s no reason why American workers can’t lead the world in the production of electric vehicles and batteries.” 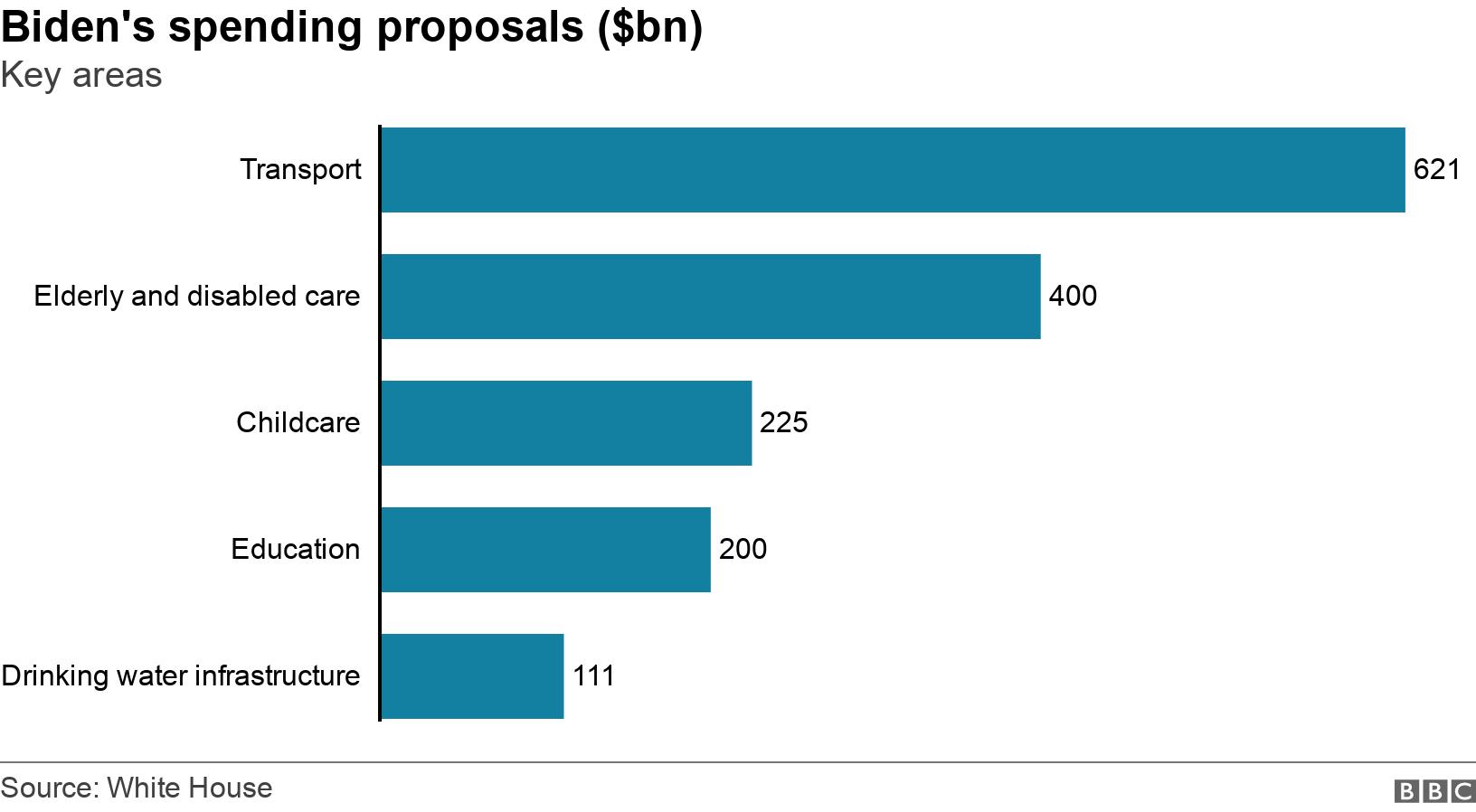 He said the $1.8tn American Families Plan, meanwhile, would focus on children and seek to provide:

On Wednesday, he framed these latest proposals in the context of foreign policy and said the US was “in a competition with China and other countries to win the 21st century”. He also called for politicians from both parties to back his plans and said he was willing to work with both sides.

How did Republicans respond?

“In his inaugural address, Biden called for unity. That was a lie, and our nation is worse-off and more divided thanks to Joe Biden,” her statement read.

The top Republican in the House, Kevin McCarthy, was more concise. “This whole thing could have just been an email,” he wrote on Twitter.

Senator Tim Scott – a possible contender for the White House in 2024 and the only black Republican senator – followed Mr Biden’s speech with the traditional rebuttal from the opposition party.

He said the proposals would “lower wages of the average American worker” and dismissed them as a “liberal wish list of big government waste”.

Mr Scott then discussed racism in America, accusing Democrats of wanting “the issue more than they want the solution”.

“America is not a racist country. It’s backwards to fight discrimination with different types of discrimination and it’s wrong to try to use our painful past to dishonestly shut down debates in the present,” he said.

Let’s Regard The Grasroots-Spartans Of NPP -President Advises

Bill and Melinda Gates divorce after 27 years of marriage