by News Desk
in Health, News, World
Reading Time: 5min read
A A
0

US President Donald Trump has said he and First Lady Melania Trump have tested positive for coronavirus and are now self-isolating.

Mr Trump, aged 74 and therefore in a high-risk group, wrote on Twitter: “We will get through this together.”

Mr Trump’s announcement comes just over a month before the presidential elections on 3 November, where he faces Democratic challenger Joe Biden.

In a tweet, Mr Biden and his wife Jill wished the first couple a swift recovery: “We will continue to pray for the health and safety of the president and his family,” he said.

It is not clear whether Mr Biden is also being tested, and whether he will continue his campaign on Friday with a scheduled visit to Michigan. He stood approximately 10ft (3m) away from Mr Trump during the debate.

Debate moderator Chris Wallace said on Friday he was getting tested.

A person is required to self-isolate after either showing coronavirus symptoms or a positive test. Meanwhile, quarantine restricts the movements of those who have been in contact with an infected person, but are not themselves positive or symptomatic.

Mr Trump has mostly spurned mask-wearing and has often been pictured not socially distanced with aides or others during official engagements.

The coronavirus has infected more than 7.2 million Americans, killing more than 200,000 of them. 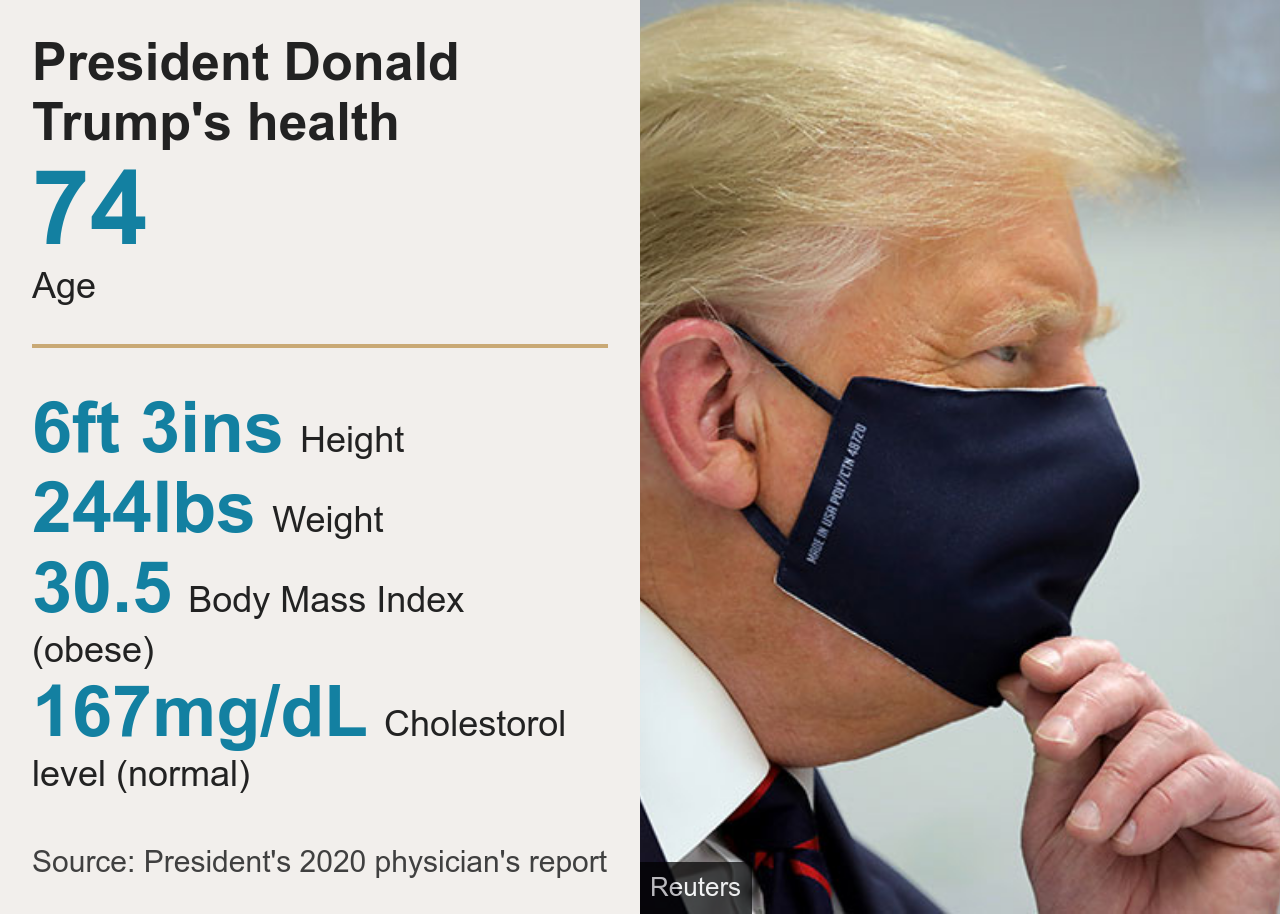 What do we know about Mr Trump’s health?

Mr Trump’s physician, Dr Sean Conley, released a statement late on Thursday, saying the president and the first lady were “both well at this time, and they plan to remain at home within the White House during their convalescence”.

“Rest assured I expect the president to continue carrying out his duties without disruption while recovering, and I will keep you updated on any future developments,” the statement said.

The physician provided no further details.

According to Mr Trump’s most recent physical examination earlier this year, he weighed 244lbs (110.7kg). This is considered to be obese for his height of 6ft 3ins.

But Dr Conley stated at the time that the president “remains healthy”. Mr Trump will also have the best medical care available.

America’s Centers for Disease Control and Prevention (CDC) says a person must self-isolate for 10 days after a positive test.

Earlier on Thursday, Mr Trump said he and his wife, who is 50, were going to self-isolate after Ms Hicks’s positive test.

He tweeted: “Hope Hicks, who has been working so hard without even taking a small break, has just tested positive for Covid 19. Terrible!

“The First Lady and I are waiting for our test results. In the meantime, we will begin our quarantine process!”

According to Bloomberg News, Ms Hicks is experiencing symptoms of the disease.

It is not clear how Mr Trump’s positive test will affect arrangements for the second presidential debate, which is scheduled for 15 October in Miami, Florida.

Mr Trump is not the first world leader to have tested positive. Earlier this year, British Prime Minister Boris Johnson and Brazil’s President Jair Bolsonaro were infected. They both have since recovered, although Mr Johnson had to receive regular oxygen treatment to help his breathing during hospitalisation.

Who else has been tested?

Vice-President Mike Pence and his wife were tested on Friday morning, and the results were negative, Mr Pence’s press secretary Devin O’Malley tweeted.

Later on Friday, House Speaker Nancy Pelosi, who would in theory take charge of government if both the president and vice-president were incapacitated, said she had been tested on Friday morning and had not yet received the results.

Ms Pelosi, a Democrat, said “continuity plans were in place”, but she herself had not been contacted by the White House about this.

Other members of the Trump family – his daughter Ivanka, son Barron and son-in-law Jared Kushner – have all tested negative.

In May, vice-presidential spokeswoman Katie Miller tested positive, as well as a member of the US Navy who was serving as one of Mr Trump’s personal valets.

The White House tests aides and anyone else who comes into contact with the president daily.