by News Desk
in More News, News
Reading Time: 2min read
A A
0

The Bibini royal family of Oblogo is calling on the Ghana Police Service and the Attorney General to help deliver justice to the family in memory of the late Chief of Oblogo, Nii Kweku Bibini III.

The family says the manner in which all the alleged murderers of the late chief were granted bail one after the other left much to be desired, stressing that the killers must be punished for their actions in the interest of peace, harmony and most importantly, justice.

Recall that the late chief of Oblogo, a farming community in the Ga South municipality of the Greater Accra region was killed in a bloody attack by a rival group at his palace in Oblogo on April 8.2012.

After the incident, 14 suspects were arrested and prosecutions began at the High Court (Human Rights Division), Accra but till date justice has not been seen to be served.

The State Attorney after scrutinizing the facts and the case docket was of the view that the court could grant bail to 11 applicants leaving behind three accused persons. Subsequently, the 11 were granted bail.

However, a spokesperson for the Binini family who pleaded anonymity told this paper, he suspects foul play because Abdul Rauf, one of three accused persons whom the court said should not be granted bail was released.

Citing an instance to back his claim, he recalled that at a point during the trial, the families were notified to appear in court on October 23, 2012, but the suspects were taken to court on Friday, October 12, 2012, without prior notice to them and that was when Rauf was granted bail.

The spokesperson said the CID which was handling the case told him he was not informed by the state prosecutor about the hearing of the case in court that day.

He accused the state prosecutor of playing all manner of tricks on the family with the clear intention of preventing the family from being served justice.

The spokesperson said he believed something might have changed hands at the detriment of the rule of law and justice but said his family would remain resolute.

The spokesperson insisted the perpetrators of the crime must be severely punished to serve as deterrent to others and avoid a situation like the Dagbon chieftaincy crisis which was recently brought to an end, from happening in Oblogo saying justice delayed is justice denied.

The then Greater Accra Regional Minister Nii Laryea Afotey Agbo, upon visiting the crime scene after the incident had this to say “Nobody is above the law, and the police are there to protect everybody, and so we would make sure that all involved in this criminal act would be arrested for the law to take its own course.”

The family is therefore asking when justice will be served.

Tema Mantse Calls For Change In Law Of By-Elections 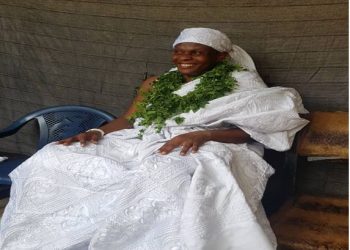